The completion of the potpourri events marks the end of our 11 year and we are already looking forward to next fall.  The curriculum committee will be busy over the summer and you will see some changes to the new program.

The potpourri events were very successful and bode well for the coming year.  Here is a link to some snaps from the Donnelly Saga by one of our photographers who actual knows how to use a real camera (versus a smart phone).

Please stay turned on this channel for details on the upcoming open house and fall courses.

We are always looking for new members who wish to keep their mind active through presentations and discussions on a broad range of topics, and stay socially engaged in the community.

Recently several members have moved out of the area: Roberta Walker, Beckey Jackson, Cam and Diana Taylor and Linda Matte. There is always room for more. Perhaps an unsolicited email from Linda will inspire you to join us this fall.

… I have moved back home to Windsor. Without a doubt Partners has been one of the most informative, stimulating groups I have ever been affiliated to. Also, the friendships were authentic and always of great comfort. You have all been creative and generous and may you always continue to be curious.
Best Regards….always, Linda Matte” 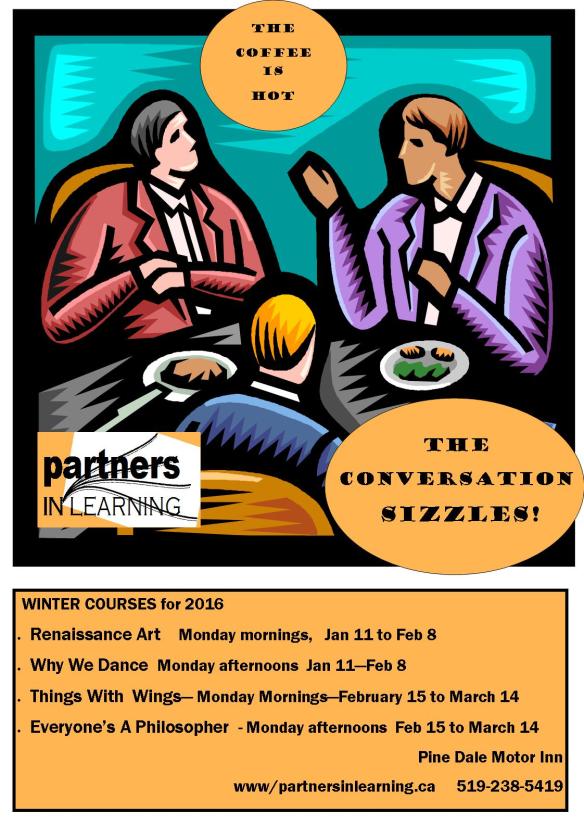 please join us for our
Annual General Meeting & Christmas

When Partners in Learning gathers on September 14 to start its fall schedule of courses, it will also be embarking on the second decade of its activity in Grand Bend. Originally the brainchild of John Merkies and Bill Metcalfe and several others, Partners in Learning is modeled after a London organization known as Society for Learning in Retirement.

Ten years ago, some local people were attempting, even in the drifts of winter, to attend sessions in London, but were growing more and more wary of the drive. They took a look around at the retirement community located here and realized that it represented a huge range of experience and knowledge. Why could we not have a similar learning-focused group in Grand Bend? And so we did. And so we do.

“We cater to a rather select group”, said Nancy Winters, when asked who Partners appeals to. “But not select in the way some people assume. We are not `intellectuals. Rather we are retirees who miss the stimulation and challenge of the workplace, and seek out an organization to keep our brains sharp and sustain our natural need for social interaction. We are people who want to understand aspects of our world that we did not have time to think about while we were raising children and making a living:’

In celebration of ten successful years, we are changing our morning courses to accommodate people who do not feel comfortable doing research and writing presentations. We have operated by the same peer-learning format for ten years. Since retirees in this community are already extremely busy, we are basing the morning courses on the extensive availability of digital formats. This fall we will be relying on TED Talks. This is a very gentle way back into the education some people mistakenly believe that they have outgrown. Our first morning course will be “Head Games” a series of talks and discussion on the mysteries and marvels of the human brain.

Our afternoon courses will be in the original format. The first of these will be a timely series called “Understanding Islam: For so many of us the middle east is increasingly confusing and worrisome. This course will try to put the faith and lifestyle of millions into a reasonable perspective.

We meet Mondays at the Pine Dale Motor Inn, which has become like a second home for us. For most of us, “Blue Monday” has morphed into the best day of the week We urge retirees from the entire region to give us a try. And if you still work, but not on Mondays, we have some thing truly different for you!

We also offer two discussion formats on Tuesday afternoons at the Pine Dale Lounge at 2:00 p.m.. These are Socrates Cafe, at which we offer members a chance to debate issues of the time; and a new, more informal gathering to Grand Bend issues called Talk of the Town. Socrates Cafe takes place on the third Tuesday of the month. Talk of the Town is on the first Tuesday of each month.

For additional information, please look at our web-site: http://www.partnersinlearning.ca. OR call 519-238-8800.

Celebrate our 10th year at an Open House on September 8.

We have new ways to stay engaged with your community and with each other!

This Christmas, a Grand Bend committee has initiated a series of efforts to encourage Grand Bend to “Light Up”. Also this year, Partners in Learning is honouring the season by providing judges and prizes for the most beautiful, imaginative, and spirited outdoor lighting. On Wednesday, December 17, the Partners Executive presented the winners of the Grand Illumination Contest. They are as follows:

Partners in Learning congratulates everyone who brought a wintertime sparkle to Grand Bend. Please go out and witness Grand Bend alight. Please admire the symphony of colour at the Crawford’s famous Wee Lake residence.  On your way by, salute the Greens’ stalwart tree trunks in Merrywood. Find a friend to let you into the Cove and slowly drive its brilliant streets. Grand Bend is ablaze with Christmas spirit.

Webmaster Note: A special thanks to Nancy Winters for leading the PIL executive through this process.

“… let me invite all members and their guest to our Annual General Meeting and Christmas Potluck Luncheon of Partners In Learning at the Southcott Pines Clubhouse, 10246 Lakeview Ave., Grand Bend on Monday, December 1, 2014 at 12:00 pm.”

Our own, indomitable Molly Russell will be hosting a celebration on the start of summer.  In her own words …

“I will be hosting the annual Summer Solstice gathering on Saturday, June 21st at Maple Grove for members of Partners and their partners, family, whatever, at 7:00 PM.  Folks are asked to bring a chair, some munchies for later and a beverage if they wish.  I’ll supply a non alcoholic punch.  Don Santor will bring the song sheets and please bring drums, musical instruments and your voices.  Could you please park in the playing field on the left side of the driveway before ascending the hill, crossing the bridge and arriving at my place, #5.
We will hopefully bring in a warm and beautiful summer which is long overdue.”
Molly.

Bill Metcalfe is a man of many interests:  jazz, theatre, public speaking, and human nature, to name just a few.  But it is Probus that has become his great passion in recent years.

Bill grew up in Toronto, and served for five years in the Royal Canadian Air Force as an Aero-electrical technician.

In his professional career, Bill was a marketing and advertising executive, which might account for his deep interest in HUMOUR.  He spent the last 10 years of his career at the former Champion Road Machinery in Goderich, as Director of Marketing Services. Bill retired in 1988, and he and Mary then moved to Grand Bend.

But he continued his interest in business by working as a volunteer consultant in the Canadian Executive Services Overseas in China and Czechoslovakia. He also took an active part in various community projects around Grand Bend.

In 1995, Bill joined with Don Tedford and others to form the Probus Club of Grand Bend and Area.  After serving a term as President of that club, Bill turned his attention to helping to establish other Probus clubs including the Women’s Probus Club of Grand Bend, and new clubs in Goderich, Exeter, and Forest.  He also facilitated the formation of new clubs in Strathroy and Naples, Florida.

Bill told me that what appealed to him most about Probus when he first learned about it, was that he wouldn’t have to do any work.  So I am a bit puzzled about Bill’s definition of ‘work’ or ‘no work’.

Above all, Bill is one of our area’s truly fine gentlemen.

The Executive of Partners in Learning can double-down on this praise for the “work” Bill did to create and support our organization. Well deserved Bill!

The Huron Shores United Church is our host and partner, but due to COVOD-19 you are more likely to find us on Zoom.

The London Society for Learning in Retirement is our parent organization and you are welcome to check out their programs.

Partners in Learning acknowledges the great work done by the Lakeshore Eco Network.